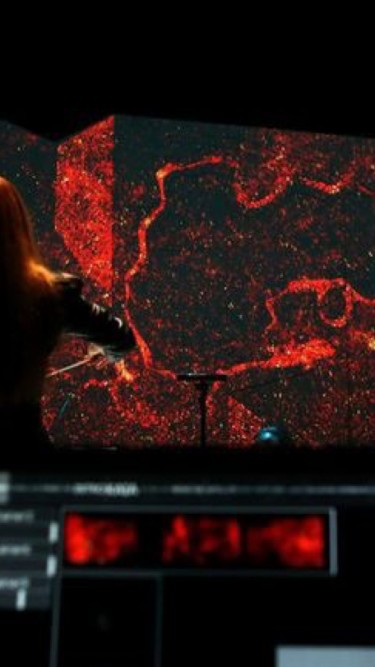 VolvoxLabs was once again charged as the digital artist and creative technologist to produce and develop the visual components of a unique and immersive symphonic/electronic concert performance featuring all new re-imagined versions of the most famous works from the award-winning, multiple-platinum artist, film composer and technologist Brian Transeau (also known by his performance name, BT).

The worldwide touring multimedia show, entitled Electronic Opus, included exclusive synchronized video and real-time effects and music arrangements, hyper-synchronized lighting, as well as unique interactive segments using Kinect sensors to create an explosive one-of-a-kind entertainment. A massive 50’ cnc-milled wall was built and fabricated especially for this spectacle! Because of the technological rigor needed for this multimedia show, VVOX developed an integrated system to coordinate the visual components seamlessly with the orchestra performance, BT and the conductor.

VVOX discussed the different angles of approaching projection mapping but didn’t want to be stuck with geometrical shapes since their visuals were more focused on taking the audience on a journey through space and time, from smallest molecule to galaxies in outer space and such. Based on these idea, VVOX came up with a projection mapping surface representing landscape topography, a physical manifestation of the animated worlds. The topography also serves as a wormhole to different dimensions.

The show premiered on March 29, 2015 at the Adrienne Arsht Center in Miami during the annual Winter Music Conference to great critical and fan acclaim.