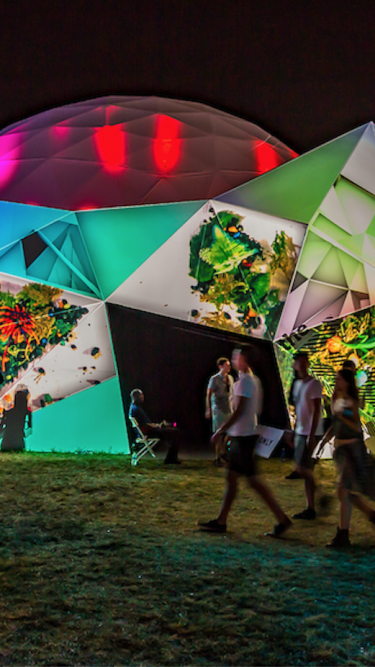 META.is conceptualized, curated and produced The Lab, an experience that brought together the best creative technologists in New York City to create an immersive hub for festival-goers.

The Lab was Presented by The Verge and powered by HP.

THE LAB is composed of three elements: the Façade, the Exhibition, and the Dome. All participating artists are based in New York City, showcasing how the city is truly the center of cutting edge art and technology.

With generative and motion-graphic visuals by META.is xDirector VolvoxLabs, the façade encompassed the entire exterior of THE LAB. An ultra-high-definition video was projection-mapped onto the surface of THE LAB creating a visual journey throughout the festival. Onlookers stopped to take photos and videos in front of the ever-changing facade, and many danced in front of it, letting their shadows interplay with the projections.

Visually produced by Invisible Light Network and Dirt Empire and sonically produced by Antfood, the massive 69’ foot dome allowed attendees to experience a fully immersive, virtual reality theater like no other. Brooklyn Magazine hailed the experience, saying, “Lying there was the closest and most connected I have felt to a huge group of strangers in a long time, the most overwhelmed and awed I’ve been since I first saw a movie on IMAX.”

The Dome also featured a surprise pop-up of Emilie Baltz and Philip Sierzega’s interactive Cotton Candy Universe. The aroma of cotton candy filled the dome during each performance, adding an unexpected olfactory element.

PRAISE FOR THE LAB

“The Future of Music Festivals” – Business Insider
“Dazzling” – Creator’s Project
“Digital Art for Jumping Into” – Wall Street Journal
“The smartest thing you could do on Day 1 was get there (Panorama) early and start off at The Lab.” – Observer
“The place felt like a playground for festival goers.” – Bustle
“Even during performances by headlining music acts, the line into The Lab remained jammed.” – J. Walter Thompson Intelligence
“…the perfect spot for your festival selfie.” – Vogue
“…The Lab was a reminder that New York creatives have a strong hunger for innovation…” – New York Observer

Wall Street Journal  // Digital Art for Jumping Into
The Creator’s Project // Here’s a Sneak Peek of Panorama Festival’s Dazzling Visual Arts Hub
New Yorker // MUSIC FESTIVALS IN YOUR THIRTIES: THE SEQUEL
Forbes // Cotton Candy Theremins, High-Tech Pinball, And More Gonzo Tech At The Panorama Festival
Forbes // How The Panorama Music Festival Seeks To Turn Technologists And Artists Into Rock Stars
Mashable // Panorama’s The Lab is a high-tech art experience, with cotton candy too
The Verge // Introducing The Lab, our incredible technology and art exhibit at the Panorama festival
Vogue // Everything You Need to Know About the Panorama Music Festival
Brooklyn Magazine // 7 Best Moments from Panorama Day 2, Ranked
J. Walter Thompson Intelligence // The Lab at Panorama
iDigital Times // A 70-Foot VR Dome Stole The Show At Panorama NYC – Here’s The Guys That Built It
Bustle // What Happens When A Modern Art Museum Finds Itself At A Music Festival